Test cricket is alive and slapping

The ascendancy in this Test match has been bouncing around like an old WACA wicket. Yesterday we thought we'd seen a bit of a good innings with Haddin's knock - until Chris Gayle decided to remind the world that Sehwag wasn't the only free-hitting opener in the world and slapped the Aussie bowling. Midge is used to this kind of treatment though - I'm sure he gets it all the time from Black Belt Bratich.

Gayle wasn't the only one doing a bit of slapping yesterday. Haddin, Midge and Benn got themselves into a bitch-fight with lots of big talk and bat-pointing. Good. An incident like this might be just what revives the vicious streak in West Indies cricket and, despite my dislike for this sort of behaviour on a cricket pitch usually, this time it might just be beneficial to the game.

Seriously, though, this match has had everything. Vicious fast bowling from Kemar Roach that forced Ponting to retire hurt (ha ha HA!), Gayle's blitzing hundred, THAT hit onto the the roof of the Lillee-Marsh stand, a typical West Indian collapse today, what is now becoming a typical Australian collapse today, Ponting trying to do a Captain Courageous a la Graeme Smith (but not realising that broken hands carry considerably more points than sore elbows) and the possibility of a fascinating last two days with a chase for the West Indies that will be difficult but is by no means unattainable.

One thing that Australian viewers have to put up with, though, are the Swisse vitamin ads. They have drifted between the vaguely silly (Ponting hitting ten year olds around the park) to the incredibly dull (Ponting talking). I mean, what is it with these latest ones? The background is grey, his shirt is grey, his trousers are grey - they sure wanted to spice these ads up a bit! Not only that, one of the featured products is Swisse Hair Nails Skin. Now, I haven't really had the stomach to check out Ricky P's nails or skin, but he sure has plenty of hair - although not necessarily in the place where it's most wanted. Put it this way, he might need to use Head and Shoulders Shampoo for a bit more than just his head and shoulders...

But, as they say, a picture's worth a thousand words: 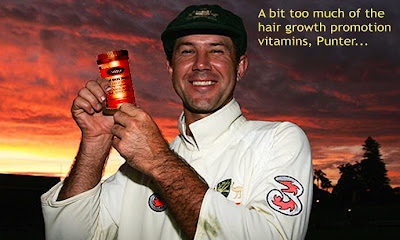